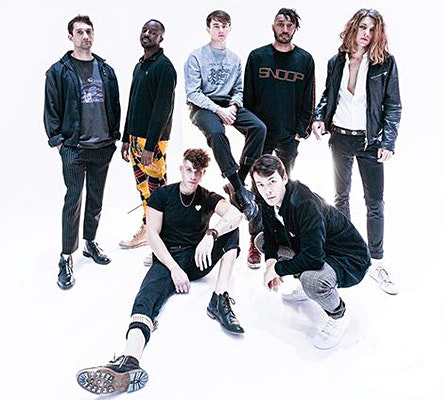 “‘Who do we sound like?’ That’s always the hardest question for us to answer” explains Michael Ricciardulli (guitar).

“We have so many influences from so many different places. When it all falls together, we end up with songs that don’t sound like anyone else.”Blending rock, pop, r&b, and hip-hop, Juice embraced the diversity of their signature sound early on.

After graduating, the band recorded and released their first professional EP, 2018’s Workin’ on Lovin’.

With new music and two old minivans, the band hit the road for an almost non-stop year and a half of national touring.

Reflecting on their touring and coming to terms with a new phase of life, Juice gathered their collective experiences into their 2019 EP, you are simply magnificent.

The project confronts difficult and powerful emotions, including loneliness, lost love, hopelessness and obsession.Following the release of you are simply magnificent, Juice spent the remainder of 2019 living together as roommates in Queens, New York.

Their upcoming single “DiCaprio (Love Me All the Time)” and accompanying video is authentic to that experience. The single features hooks and verses from five of the band members, and gathers inspiration from late ‘90s and early 2000’s pop and hip-hop.