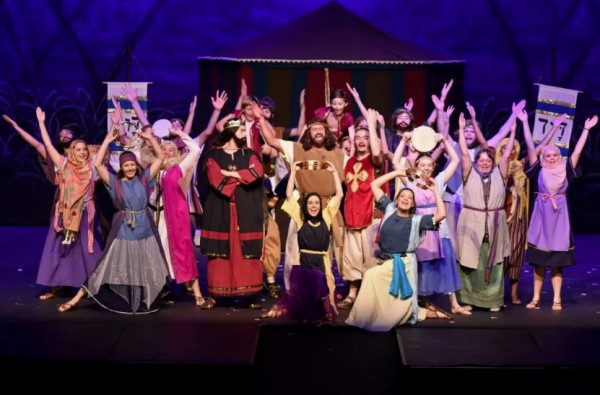 “A man after God’s own heart.” Imagine anyone being given that title. Only David, the shepherd boy turned king, has ever had such a distinction. The youngest of eight brothers, David had no choice but to be relegated to the fields to tend his father’s sheep. But, David didn’t complain and he didn’t shun his duties. Instead, as with most things in his life, he faced the responsibility with courage and daring. Not many could boast killing lions and bears to assure the safety of their flock. But, David was not average and he was not to be defeated or overcome.

Our story of King David chronicles the life of David from his humble beginnings as a shepherd--to popular King of Israel. The show opens with the coronation of David. Following this powerful opening number, “Canticle of the King,” David is confronted by his mother Keturah, the always influential and delightfully cantankerous family matriarch. She serves as comic relief and narrator throughout the story. Keturah teasingly scolds David for spending so much of his time working out final preparations for the return of the Ark of the Covenant. Worshiping God was something David learned to do as a young child. Later in the musical David reflects on those memories as he sings, “When as a child I heard Your voice, songs filled my heart and I rejoiced. The stars came alive and began to sing, the heavens broke forth; I heard melodies ring.” David’s delight in music, celebration, and worship were central to his life. His passionate personality did not always serve him well and he made his share of mistakes. But, David’s heart for worship stayed with him to the end.

When performed in its entirety, King David (Sweet Psalmist of Israel) is about 2 hours long. The show can be cut back by trimming scenes and songs at the director’s discretion.

Iscah (Can be male or female)

THE USE OF A CHORUS

A chorus can, and if possible probably should, be incorporated into this musical. Due to stage size, the original professional productions used a limited chorus of just five or six. However, a chorus of virtually any size could be added to a number of the scenes throughout the musical. But, if your available acting pool is shallow, all the brothers, servants, etc., could easily “become” the chorus in the scenes that call for a crowd of people (i.e. opening, finale, Goliath battle, battle victory celebration, campfire scenes, etc.).